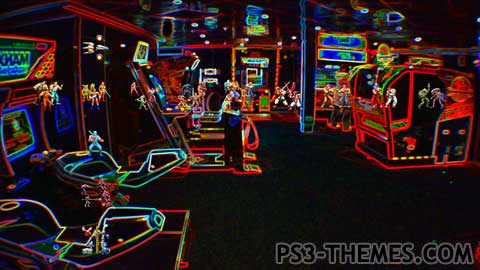 [All characters and/or logos depicted in this theme are trademarks and/or registered trademarks and are property of their respective owners. All rights reserved.]

Tribute theme to all those old games that accompanied our childhood (or at least the childhood of “oldies” like me, but there’s also stuff for younger… :D).
In this theme, backgrounds are not so important because I wanted to emphasize the icons: they are the most important part.
To create them, I took characters, objects and other stuff from my vast collection of old games that made gaming entertainment history (well, not really ALL the games, otherwise I would have to make a 1GB theme, and the PS3 has just 70 icons… :P).
It was a very long and hard work, but also very funny because I had to play again all those games: I not only retrieved the characters etc, but I also had to work hard on them, resizing and redrawing pixel by pixel almost all the sprites according to their respective graphic resolutions due to the different consoles/computers from which they come (Atari-ST, Amiga, Master System, Genesis/Megadrive, NES, Super NES and so on…).
After that, I added a very slight 3D effect to intentionally create a contrast between old and new, so the sprites are still in a raw 2D bitmap, but enriched with a bit of “roundness”.
Probably, many will not understand my intentions (or the “spirit” of this theme) but it doesn’t matter: I wanted to do it and I did it.
Enjoy!
Download Here

pretty cool! I cant imagine the number of headaches you had to go through to get those icons created! They all look really good and clean too!

my computers hdd finally broke. i have most of my new themes backed up already, but it will take a week or 2 to save for a new laptop. :(……..oh and, long time no see!

Well, it’s not a bad idea, after all…
The only problem is that in the area where I live, there are frequent power surges that cause blackouts (that’s one of the reasons why I’ll move to a new home soon): useless to tell you how terrified I am every time I have to update the firmware… 😛

I seriously think that Sony should speed up these operations in some way.
Part of the slowness is due to the fact that the HDD runs at 5200 rpm, while one at 7200 rpm could even improve the games loading…

Yup you could do that, when i backed mine up i left it on that night while i was asleep 🙂

Yep, that’s what I was saying: have a lot of copy-protected files (damn you again, EA and CAPCOM!!! :D)
And yeah, I know there’s the utility to backup all data, but I have to say that it’s reeeaaally boring… 😛
Well, maybe I’ll buy the new PS3 Slim with 250GB HDD… 😀

OPTIMUS you were talking about backing up data but some thing’s are copy protected such as save’s etc. If you try to copy save file’s like that to a thumb drive say it won’t let you but if you use back up utility it will copy everything on your hdd to whatever you’re using external hdd or whatever. I have a 500gb external took a few hr’s to back my data up lol. Over 100gb’s of stuff 🙂 but yeah it will all be there when you restore it to a new hdd if you upgrade.

i meant, did u have any idea what i was talking about. it was aan obvious hint for the wasteland survivor. i’ll get the preview when im on my computer. im on the ps3 now

Yep, I knew you were talking about that (I’m waiting for it, not to mention Elder Scrolls V!)
But… if you’re now telling me you’ve done most of the work… what kind of ideas you need?

woops did i say that out loud……twice!

i’ll give you a hint, i’m making a Fallout New Vegas theme. i might upload a preview of it, although the hard part is done, the homerow icons look sweet

“Yep, I could change the HDD: in this case, I should make the back up of all data, but it would still be a problem because many of my games are copy-protected (damn you, EA and CAPCOM!!!)… ”
Yeah remember back in the days? Visiting your friends with your games and your memory card? Everything was so simple…

ya that sucks…no way around it really….except….not get GT5!!!!! i’ll have to put that red dead renovation theme on hold lets just say im…re-imagining a post apocalyptic los vegas, and recreating it into a theme….to gain good karma! any ideas?

“Yep, I could change the HDD: in this case, I should make the back up of all data, but it would still be a problem because many of my games are copy-protected (damn you, EA and CAPCOM!!!)… :(”

Yeah remember back in the days? Visiting your friends with your games and your memory card? 😀 Everything was so simple…