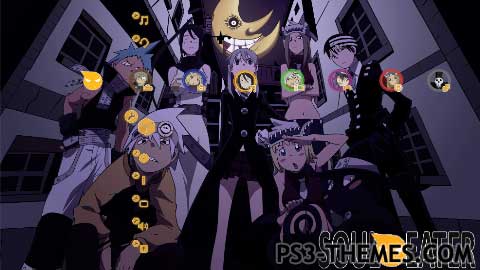 This theme was created based around a previously avaible theme by Wasgoed (http://wasgoed.deviantart.com/). He created the majority of the theme icons and deserves majority credit. I liked his theme so much that I based this one around it, only updated it with the missing icons to work with the latest PS3 firmware (at time of making this, fw 3.30). Since Wasgoed’s theme, which was made a while back, there has been new ps3 icons added, most notably the Trophy icon, and PSP Minis.
Other than the added icons I also added wallpapers to fit the PS3 theme max of 16, both HD and SD. The wallpapers feature the main characters of the show, for the most part. Death the Kidd, Black Star, Maka, and of course their ‘weapon’ partners. Theres a Stein in there too, with some Medusa, Crona, and Blair. Should be something for everyone.

For the original theme made by Wasgoed, please check here: http://www.ps3-themes.com/comics-anime/soul-eater.html
Download Here

thanks i love this anime =D