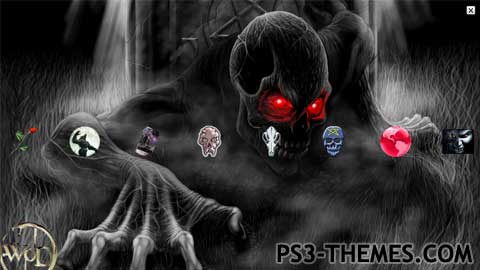 I have just concluded the theme I mentioned in the MK Theme comments. I made this theme for my brother as he requested me a theme about White Wolf’s World of Darkness!

Now, for those who have no idea what the Wolrd of Darkness is:
White Wolf’s World of Darkness is a searies of Role-Playing Games books created by White Wolf. Furthermore, the thematic of World of Darkness allow you to role-play various kinds of Dark Beings, such as Vampire, Werewolves, Mages, Wraiths, and so on.
The thematic of the books are so profound and phylosofic that they don’t reach only the role-players, but also many interested readers that have nothing to do with role-playing!

The theme includes:
All custom Icons – (Presents fun icons for people who enjoy werewolves and

vampires, but also includes icons which will be known only for people who know the game, specially the Settings Row)
5 HD wallpapers
4 SD wallpapers
5 Custom Sounds – Which, by the idea of the theme includes:
– Dice Shaking
– Dice Rolling
– Page Turn Sound
– Wolf Howl

love this theme and story behind it keep up good work. look if get chance can make a Zombie theme nobody has any good themes on this subject check it out

Nice theme. Do you know where i can get just that background pic please and thanks?

Nice theme, where can I find just that one wallpaper for this theme? Thanks

Love the theme but can we get a silent version please

My m8s a fan of this & he’s been trying relentlessly to get me into it. Looks like a good theme. Thanks for sharing Leon.

F-Rott: I appreciate the back info for World of Darkness. I personally never really heard of it until now. Looks like you put a lot of attention, love and time into this theme, and I cannot fault that! True! ^^ It was a hard theme to create and took a lot of time. The main challenge was basically given because of the lack of information I found while doing this theme. Still, thanks F-Rott, I really gave lots of attention and dedicated a good time to it. 🙂 I was considering to show here what the symbols mean, if someone… Read more »

I appreciate the back info for World of Darkness. I personally never really heard of it until now. Looks like you put a lot of attention, love and time into this theme, and I cannot fault that!

No problem bro. keep up the good work 🙂

Once again you did it! Awesome theme 😀