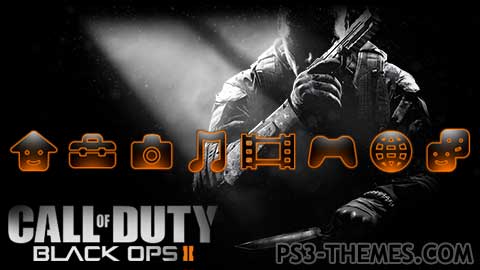 Made with Adobe Photoshop & Adobe Flash.

I wanted to give the appearance of the soldier breathing heavy while hiding in an old dusty room.
There are more particles and a slowly moving dust cloud reflected in the light that may not be very visible in the preview video.

UPDATE!
Since the last DLC was released for PS3 I decided to revisit this theme.
*The dust cloud is more visible.
*Removed spinning Treyarch logo.
*Added a little glow effect to Black Ops II logo.
*Icon colors are more vibrant.

Thanks to THE_P12EDATOR for the idea of the dust particles and the breathing.
Download Here

Love it but link to old one?

@rug174 – Sorry that I just saw your comment. Can you link a vid or clip of the song you want. I may be able to help you out 🙂

dear author. my Son is a Halloween movie fanatic. I have tried to create one for him, but I could really use some help. {IDEA} I want to use your Icon theme and dust particles. however for the background I want to use this background.

with the cold boot song from the Halloween theme song.
Would you help me out?

I love your work

Ultra are we gonna see a Black Ops 3 theme like this from you. Please say yes.

LOL thanks for that. I really appreciate it. 🙂

you are really really pro , OMG

Not at the moment. I may do something. idk

can this theme be used in SD as well?

Wow,that is awesome :D!But,have you ever made a ps3 account?IJust asking :P.

I liked it nice & dark.Who ever did it is sick

looks okay gonna try it out!

@doom – bring it kiiiid! Although I’m only very good (usually) at Free-For-All. 😀 When you see me on, get at me.

@OPTIMUS and anybody – My son uploaded his first theme (Minecraft Pro SlideShow), so be on the lookout for that 🙂

Although I don’t like Call of Duty this is a good theme and for some reason google chrome says there is malware on the site :s

just grabbed this theme, imma try it out! lol

@-.- Glowball Here’s the shite, ppl are going to rip you off, it is called Flattery that is all it is , site rules and all that cal. One just never knows whom and when , but it will happen with “Extract.” It would be nice if you were mentioned however since it is just the net no one can claim blame. It is always nice to get a nod , however it supposedly isn’t necessary so move the f^%&k on. Shame you can’t just see that REALLY! BTW I DON’T CARE FOR THIS GAME ULTRA, however nice job +1… Read more »

great job as always man. keep up the awesome work 🙂 +1