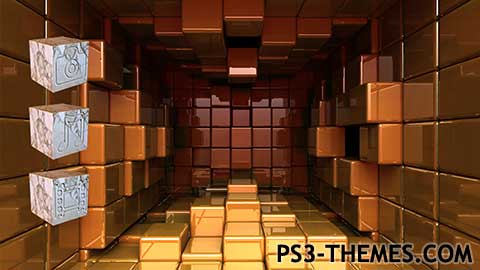 A couple of PS3 Themes users suggested that I should have used 3D icons instead of the 2D icons I originally made and I thought it was a great idea so I made a new set of 3D icons for this version. I used this opportunity to change many of the pictures too so it’s a major overhaul of the original theme, hopefully it’s a big improvement to the first version and thanks to those that gave me the suggestion to use 3D icons.

@-.- Nipplestiltskin, hey thanks a lot for the cool complements man, I always try to include the best image quality possible by upping the pixel count and so on. Sorry you didn’t like the Walle pic mate, I just thought it was a bit retro with it being the most famous cube of all and kind of liked the way he was looking at it, I hoped it would make people smile but maybe it’s a fail after all ? 🙂 I always listen to what people say about my themes so I’ll look into removing that pic in the… Read more »

I REALLY love this theme.. the resolution is fantastic, and the brown fulll cubed backgrounds, the black/brown, are really huge standouts. Love the icons, but i could do without walle.. ruins the continuity. Do another man..!

Thanks very much uLtRaMa6nEt1c, I took your advice and I think you were right, it looks better with 3D icons 🙂

Damn ! I forgot to add that the theme contains 12 HD pictures.

@-.- uLtRaMa6nEt1c & Dowayne Xavier 88, thanks very much for the complements guys nice one :)) Yeah I hear you about the icons I just thought if they were 3D they might take up too much room on the screen, I guess I should have made a test set of 3D icons to see for myself first. I’ll definitely look into changing the icons to 3D but I don’t think I’ll be able to update the theme as I’ve tried several times with my older themes and PS3 Themes has ignored my requests, not sure why, I must be doing… Read more »

This is a pretty cool theme, definitely a Thumbs Up!
I agree with UltraMagnetic on the cubes being 3D, that would of made it Phenominal.

I like it. Cool idea. 3D cube icons would have been real cool though +1